New book: The State of Populism in Europe in 2016

The new study of Policy Solutions and FEPS surveys the popularity and the influence of populist parties in the EU’s 28 Member States in 2016. In this new book, we examine the countries in which populist parties were able to achieve real breakthroughs, and those in which they caused ‘more smoke than fire.’ 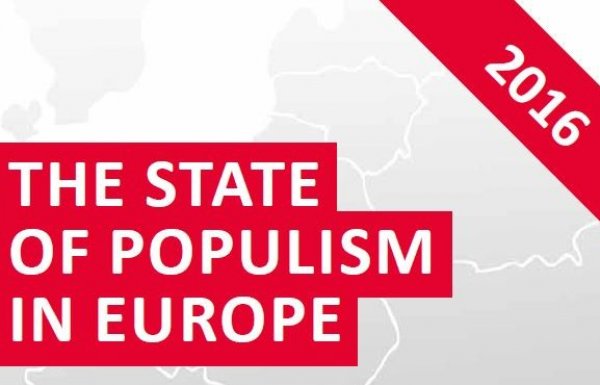 The State of Populism in Europe book underlines that 2016 has been one of the most eventful years in European politics since the fall of the Berlin Wall in 1989. Observers accustomed to predictable European affairs were shocked again and again by unexpected events: the refugee crisis – still lingering from the previous year – and the social tensions surrounding it; the British referendum on leaving the European Union (EU) and its striking outcome that shook the European project to its core with the unprecedented case of a Member State parting from the EU; the surprising results of German regional elections and the worrying trend of increasing popularity of right wing populists; the Hungarian plebiscite on the EU’s migrant quota, which added to refugee crisis tensions at the European level; and the Italian referendum on constitutional reforms that turned into a protest vote against the country’s prime minister. This eventful year attests that not only is the EU changing, but so too is the world. The United States elected a right wing populist president and the world stood in shock and disbelief. Two illiberal democracies, Russia and Turkey, have become increasingly active in interfering with both the lives of their citizens and global affairs, while their leaders persecute domestic liberal thinkers with increasing ruthlessness.

These political processes differ from one another in terms of their geographies, causalities and results. Nevertheless, they share many similarities. Clearly, powers that engage in politics in the name of “the people” and against “the elites” are growing stronger across Europe. These actors prefer to use “the wisdom of the people” to accomplish their goals, often by using referenda as a tool to enhance their legitimacy in a direct way. These parties and politicians exploit and foment disappointment with liberal democracy, campaigning with a focus on the perceived interests of the nation as opposed to European integration and international cooperation. These politicians transcend the division between the left and right of the political spectrum. They are constantly searching for new enemies to fight and thereby create new and emotionally charged cleavages in societies. They are the populists.

This book surveys the state, popularity and influence of populist parties in the EU’s 28 Member States in 2016. The Foundation for European Progressive Studies (FEPS) and Policy Solutions have been monitoring approximately 80 active populist parties in the EU since 2015, under the auspices of The Progressive Post’s Populism Tracker research project. In the study, we review the most significant results of this initiative. First, we examine which populist parties were able to achieve real breakthroughs and which ones caused “more smoke than fire.” Next, we analyse the trends in various regions of the EU and the differences between individual populist parties. Following the conclusion, readers can review the chronology of populism in 2016. Finally, we also include a detailed table of all significant European populist parties’ popularity according to opinion polls. We hope this 2016 yearbook on populism will offer useful insights to all who wish to familiarize themselves with the old and new political forces that form the political edge of our times.

The State of Populism in 2016 book can be downloaded from here.